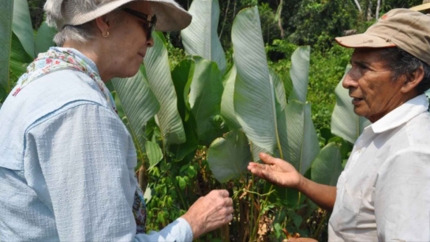 Archaeologist and anthropologist Anabel Ford has spent four decades studying the Maya civilization, principally at the vast and ancient city of El Pilar, which she discovered on the border of today’s Belize and Guatemala.

Maya culture holds lessons for the 21st-century world and its agricultural challenges, according to Dr Anabel Ford of the University of California, Santa Barbara, where she is Director of the MesoAmerican Research Center and President of the non-profit organization Exploring Solutions Past.

Over the years, Ford has developed various community projects, including programmes for school children, while continuing the archaeological investigation of El Pilar and the conservation and sustainable development of the site. Most notably, she tirelessly promotes a “bi-national” peace park, which can help resolve the long-standing dispute between Belize and Guatemala. She has also worked extensively with the area’s farmers, helping form the El Pilar Forest Garden Network to facilitate the sharing of knowledge about forest management practices.

Ford has challenged the view that the Maya civilization failed because the people had insufficient food to feed a growing population. In the latest of her six books – Maya Forest Garden: Eight Millennia of Sustainable Cultivation of the Tropical Woodlands (2015) ─ she sets out her argument that the Maya, among their many talents, were competent farmers with methods that could be useful today