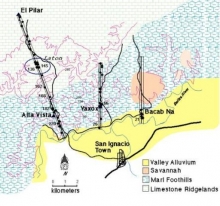 Communities of the fertile Belize River Valley were made up of moderately sized homes widely spaced from one another with just about everything that a household would need to enjoy life in those ancient times. The residents were able to afford a certain amount of luxuries such as obsidian blades, decorated vases, chert or flint knives, and pieces of jade (something that, in other areas, was only associated with elites). The even distribution, considerable household resources, and large amount of land accorded to valley residents is unique, and suggests privileges conferred by those in control of valley dwellers. The alluvial soils of the valley are among the best in the Maya Lowlands, but form only a small proportion of the area. Therefore, it is probable that they produced what we today might call cash crops, such as cotton, and tobacco, which hold their value long after they are reaped. In fact, at the time of the first Spanish explorations in Belize, the populations of the Belize River Valley were producing cacao, the source of chocolate.  It may be that their lands were used not only for their needs but also to satisfy the larger demands of their leaders.

A large factor in the evidence of privilege in valley communities may be the presence of tended Cacao trees. At the time of the first Spanish explorations in Belize, the populations of the Belize River Valley were producing cacao (chocolate). Like other ancient Mesoamericans, the Maya probably used cacao as a form of currency: "money" that literally grew on trees. But these trees had to be carefully tended, managed, and protected, something a single family could not afford to do on their own. The production of valued crops such as cacao, cotton, and tobacco implies special luxuries. The valley Maya likely received luxury goods in exchange for faithful production of chocolate, goods such as blades made of obsidian (like those produced at Latón), beads fashioned from marine shells, and ornaments of jade and other exotic stones. This reciprocal arrangement fostered a dependent relationship between the specialized farming communities and the elite aristocratic administration. The administration would have guaranteed redistribution of basic foodstuffs produced in the ridge lands in return for "cash-cropping."

But not all were so fortunate. Some Maya lived in the marginal zones, found mainly in the poorly drained clay of the foothills rising up from the valley. Inhabitants of these zones could not depend solely on agricultural pursuits. Those relegated to these areas likely augmented their farming tasks by manufacturing and independently trading stone tools, pottery, and other simple household products to satisfy their daily food needs. Consequently, few valuables were found at these ancient houses. Such households probably relied on the central administration to maintain a stable exchange environment so that their industries would net sufficient food.

While the settlements of the valley and foothills of the Belize River area may have been integrated from afar, communities of the ridgelands, such as Latón, were under the more direct scrutiny of the local Maya hierarchy whose apex was located at El Pilar. The ridgelands have the greatest proportion of good agricultural lands and make up the cornucopia of the region. The vast majority of settlements, at least 85%, were concentrated in these ridgelands that contain only a third of the areas resources.

Here, in the ridgelands, we discovered the great diversity of occupation and lifestyles in Maya society. They were composed of both dispersed areas and central civic areas. There were elite "haves", who controlled and governed, and farmer "have-nots", who toiled and bore the obligations associated with sustaining the civilization. At the community centers, elites managed everything from the local farms to the political agenda.  We can imagine that they manipulated the loyalties of fellow elites within their grasp and negotiated with their peers at other centers. These negotiations undoubtedly included distant trade relationships, as we know that many valuables were made of material not found locally in the Maya Lowlands, such as obsidian from the volcanic zones of Guatemala and Mexico, and jade from the Montagua Valley in Guatemala.

The have-nots were involved in occupations that kept all the basic aspects of daily life going. The majority of Maya were farmers who provided food for the populace, while some manufactured household items in exchanged for basic goods. Still others provided direct services to the elite and in return were supported by them. El Pilar served as the focal center for these local households as well as the wider communities throughout the Belize River area.