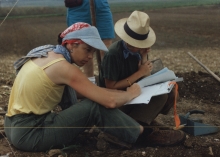 A total of 500 hectares was covered in the transect surveys of the BRASS project.  All cultural remains were mapped within a 250m wide area along the length of three transects, two 5 km long and one10 km long.  Mapped residential settlements (348) were scattered in varying densities within each transect (Figure 3).  Other types of remains included limestone quarries, chultunes (storage pits into limestone bedrock), and chert quarries.  Evidence of looting was also noted.

The analysis of data from the BRASS surveys demonstrated an association between the resource zones and settlements. According to the test excavations, most small structures displayed evidence of the basic household activities of farming, storage, cooking and serving, while a few exhibited distinctions that spoke to other, more specialized occupations.

The mosaic distribution of good hand-cultivable agricultural land spread ancient Maya across the landscape in large and small communities as well as hamlets and homesteads. Settlement patterns in the ridgelands around El Pilar show this hierarchy of community size and composition as related directly to the amount of available farmlands. Smaller areas of fertile land supported minor centers, such as Chorro, not far away to the northeast. Pockets of land, such as those of Latón, had a single administrative temple associated with an elite residence. There were other dispersed and isolated spots of good farm lands, but due to small size, these would have only field huts within or adjacent to them. All sizable areas of preferred farmlands had the same density of settlement, about one house per acre. The larger the area of preferred fertile farmlands, the larger the community, and the largest community in the area was El Pilar.