Surveys and Test Excavations of the 1980s 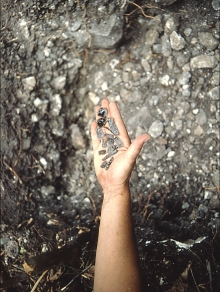 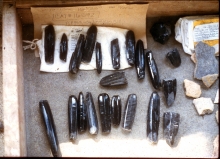 The 1983 and 1984 field seasons saw the survey of all identifiable cultural remains within three 250 m (820 ft) wide transects—one 10 km (6.2 mi) long and the other two 5 km (3.1 mi) long. The three transects were designed to traverse a range of natural environmental zones from the river bottom at 60 m (195 ft) to the ridge lands peaking above 300-400 m (980-1300 ft). The range of environmental zones—valley, foothills, ridgelands—included variation in settlement sizes, from individual farmsteads to the major center of El Pilar, and reflected on a variety of different activities from basic and local household tasks to rare and exotic obsidian blade production.

Excavations were conducted at residential sites within the identified resource zones, focusing on small structures resembling isolated field huts as well as large multi-structure groups of elite household compounds and monumental civic-ceremonial centers. The settlement locations were predictable based on the environmental factors: poor agricultural soils in rugged or swampy terrain were associated with few and scattered houses, while dense settlements, including some imposing elite patio groups, were found in the rolling fertile ridgelands concentrated in the vicinities around El Pilar. This research has helped paint a rich picture of the ancient Maya settlement, community patterns, and landscape that was the home to this complex society. These settlements and communities were integrated throughout El Pilar, by far the largest Maya center in the area.

The 1986 field season was dedicated to the rescue of data from illegal looters’ trenches at the minor centers of Alta Vista, Yaxox, Bacab Na and the major center of El Pilar. Valuable building and chronological data were recovered, and those trenches that threatened the stability of structures were backfilled. Test pits were also excavated in plaza areas associated with the looting to identify the nature of rebuilding in open areas. This was the first concentrated attention that El Pilar had received since its abandonment some thousand years earlier.

From 1985 through 1989, we expanded our test excavations at the ancient community of Latón, which lies 4.5 km south of El Pilar. In Latón, we discovered the first identifiable lowland Maya obsidian production site. This site, known as 272-136, was a large elite compound that was involved in the production of obsidian prismatic blades.  The tests outside the plaza areas revealed more than 3,000 discarded chips of obsidian per sq meter! This number of chips is off the charts; an average at any large unit would be in the order of 2-3 pieces. From trace element tests, we know that this obsidian was imported into the Belize River area from the volcanic highlands of Guatemala. This evidence reveals that this area was a major center for obsidian tool production.

Our test excavations at house sites revealed very little evidence of occupation during the Early Classic period.  This was puzzling as there was general growth and expansion of settlements by the Late Classic period.  Fortunately, we were able to re-examine the site of Barton Ramie, the first residential area to receive archaeological attention in 1954. We focused at the main temple that had been bulldozed down, exposing Preclassic and Early Classic levels. We discovered that, unlike at nearby centers Tikal and Uaxactun, Late Preclassic vessels continued to be used in the context of Early Classic in the Belize River area. This discovery goes a long way towards explaining the lack of diagnostic ceramics in our test excavation.